Get ready for round 2 of Knock Out! tryouts! We're looking forward to seeing some new faces and playing some hard ultimate. Special guest this weekend will be COACH MCQUEEN! If you don't know him, get ready. He is a smart, dedicated, passionate coach (and ultimate player) and he brings our game up another level. So come out, meet the team, play some ultimate, and have some fun!
Posted by Roswell at 9:28 AM No comments:

REMEMBER NO BREAKS, go straight through until complete. If you're moving at a good pace you should be done in just under half hour!
Posted by KNOCK OUT! Ultimate at 7:12 PM No comments:

Tonya Blanks wants to remind you that a full squat mean that when you go down you finish past parallel, if you stop short you are cheating yourself!

Also don't forget, Knock Out! and DUDE will be hosting a women's mixer for all levels this Sunday from 1-4 PM at NTC Liberty Station Fields. 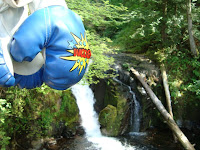 What are Tonya Blanks workouts and what is CrossFit?

To answer these questions, we've asked our friend Lori "Awesometown" Eich, current Nemesis player, and a CrossFit Level 1 Certified Coach to tell us how CrossFit training improves your athletic ability on the Ultimate Field.

The weekly Tonya Blanks workouts are designed around CrossFit, which is a training program designed for general physical preparedness. CrossFit is often defined as High Intensity, Constantly Varied, Functional Fitness. "High Intensity" means we go big, go hard, always giving 400% in every workout. "Constantly Varied" means the workouts are different every week, which keeps your body from getting settled into a routine."Functional Fitness" means we use the whole body to do work just like in real life -- for example, if I'm getting ready to pull the disc,I'm not going to just stand on the end zone line and flick my wrist --I'm going to take an approach, rotate my body around, and explode with all of my muscles to send the disc flying.
You can think of "high intensity" as the sprinting stamina part of the workout. Regardless of whether or not you're actually running, if you are going as hard as you can, as fast as you can, your heart and lungs are being trained for sprinting. You are pushing your VO2max (aka sprint endurance), and the harder you push now, the longer you can last during marathon points on the field and throughout the final games on Tournament Sunday.
"Functional fitness" applies directly to the ultimate field. Think of the last time you laid out, missed the catch, and had to jump back up to immediately play D -- that's a burpee. Or when a huck goes up and you're already in position, waiting for it to sink so you can D the crap out of it -- fast air squats build your hip/thigh/butt muscles so you can explode off the ground and win in the air. The movements in the weekly workouts are designed to build strength that is directly applicable to ultimate.
The end goal is to build power output. When you're doing a set workout for time, you are doing the same amount of total work overall -- 50 pushups in 2 minutes takes the same amount of force as 50 pushups in 20 minutes. The difference lies in the time spent working. Strength and speed combine for power. If you can do more work in less time than your opponent, you are generating more power, which translates to running faster, jumping higher, throwing farther, and winning more.
To get the most out of the weekly workouts, treat each one as a sprint workout. It's okay to scale the movements (e.g. pushups from knees) if it means you can actually complete the workout in a reasonable amount of time, but remember that when you scale you are doing less work (so try to work toward not scaling). Also think about how the movements of the workouts might apply to your ultimate game, and try to be as fast and explosive as possible. The more strength and speed you build, the more power you can output, and the more you will tool up on opponents and win.
This week's workout:
3 rounds of:
100m sprint 5 burpees
100m sprint
10 pushups
100m sprint
15 squats
Rest 90 seconds between rounds (yes, you actually get a rest in this one!)
Posted by alice at 10:47 PM 1 comment:

Come join Knock Out! and the Diego Ultimate Disc Experience (DUDE) for an informal Women's Ultimate Mixer on Sunday April 17th from 1-4pm at the NTC Liberty Station fields. Whether you are new to the game or a seasoned veteran, together we comprise a group of talented women who have fallen in love with this unique and fulfilling sport. All levels are welcome as we celebrate the women Ultimate players in San Diego and promote the continued growth of this sport in our community. At the mixer we will focus on a few skills, play some games, and round it off with a BBQ and socializing with our fellow amazing female athletes. For more information, please email sdwomensdisc@gmail.com.
Also, mark your calendars for Knock Out! tryouts! April 30 (1-4PM)/May 1 (9AM-12PM) at Mission Rancho Park
and May 14 (1-4PM)/15(9AM-12PM) at Dusty Rhodes Park (locations subject to change).
We hope to see you there!
Roswell and Tambler
Posted by KNOCK OUT! Ultimate at 10:02 PM No comments:

KO Workout of the Week

Great job to everyone who participated in our workout last week! Did you feel the burn in those sit ups? Don't forget, Tonya Blank says if you want to do your sit ups legit, your hands touch the ground behind your head when you reach the ground and your hands touch your toes when you're up. You should be doing these with your legs in the butterfly position to center the workout on your stomach muscles and take the pressure off of your hip flexers! Here's our next Workout of the Week:
As Many Rounds As Possible (AMRAP) in 10 minutes:
5 pushups
10 jumping lunges
15 sit ups
The goal is to see how many rounds you can complete in 10 minutes...and no rounding up the count...you must complete all 3 exercises for it to count as 1 round. 10 jumping lunges breakdown to 5 on each leg. Start in a lunge position, jump up, and land in a lunge position with the opposite foot in front. Again, we encourage you to put the number of rounds you’ve completed in the comments. Good Luck and have fun! 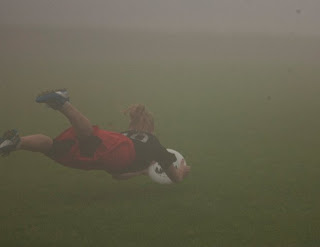 The upcoming season is a blank slate, just waiting to be written on. What are you going to write on it? Is there a deficiency in your game that you'd like to shore up? A new throw you want to work on? Pre-season is a great time to make goals and envision the kind of player you'd like to be. But what's your approach? It's great to have a goal in mind, especially to reflect on previous seasons and where you feel you could improve. It's also easy to come up with a goal. The hard part is putting in the work to achieve it, and that's where the "approach" comes in. 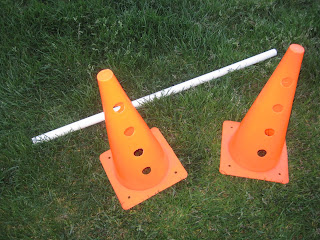 As an example, one off-season I was chatting about our disc movement with a couple of teammates, and how our around break-mark throws were not a significant part of the offense. We decided that having dominant around breaks would open up the field and make the offense flow better. Improving our individual break mark throws was the goal, but how would we achieve that? At the gym Kitt and I attended, there were 12" hurdles. We would often take a disc to the gym workouts as 10 mintues of throwing at the end of the workout (throwing when tired) was great mental practice. Eyeing the hurdles, we thought it would be great to throw under a target to really get the feel for stepping out and releasing low.

A quick trip to the sporting good store later yielded some tall plastic cones. Around the house we had some PVC pipe that we cut into 2' bars for the hurdles, then drilled out holes in the cones at 8", 6", and 4" high. Now we had adjustable height hurdles to throw under. 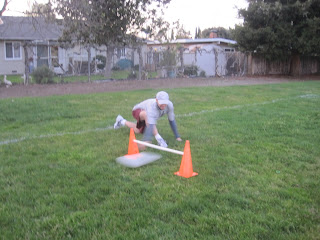 The next weekend we were at the park, bag of discs in tow. There were 4 of us to practice the step-around breaks, and 2 hurdles. Having a hurdle to throw under really emphasised the need to step out and release low. We each threw 100 backhands (in 5 sets of 20), then switched to 100 flicks. It was awesome, and surprisingly difficult to throw under the hurdle, especially on the flick side.

The next day over email we had a good laugh over just how sore we all were. That didn't stop us from doing it all over again the following weekend. Then again. Then again. The soreness stopped happening. It was easier and easier to throw under the hurdle. When practices started up we stuck to our plan of breaking around the mark, often ignoring downfield cutters in order to center the disc if we were on (or near) the sideline. The work we put in during the winter was intended to form the muscle memory of stepping out and releasing low. The work we put in during the first half of the season was intended to form the habit of using the around break in game situations. That was our approach. I can't speak for the others who joined me on those days in the park, but personally I felt like I was going to break any mark that year. Having a goal is great, but having a plan to achieve the goal is even better. If you can get buy-in from other people on the plan, then together you will be more likely to stick to the plan an achieve the goal.

Some goals are measurable (e.g. breaking six minutes in the mile), and some less so (strong around break-mark throws). However, when you break the mark in a game, and it feels natural and easy and your mark was never going to stop it, then you know all the work has paid off. You know your plan was solid. Plans aren't just long term. When you line up across from someone on defense, what do you know about them? Do they like to run deep? Do they like to juke a lot? Do they huck? Do they love their inside-out flick? At the start of the point you can make a plan too. Use as much information as you have on your opponent, and decide what you are going to take away.

Ultimate is a fluid game full of reactions, improvisations, and adjustments, and by having an approach to each situation you will be better prepared to make those adjustments on the fly. You'll recognize situations quicker and react before your opponent has time to. Try it out at your next pickup game. Decide on a plan before the point and stick to it. See if your adjustments during the point are easier to make in the framework of your plan. Soon it'll be second nature to ask yourself... what's your approach?